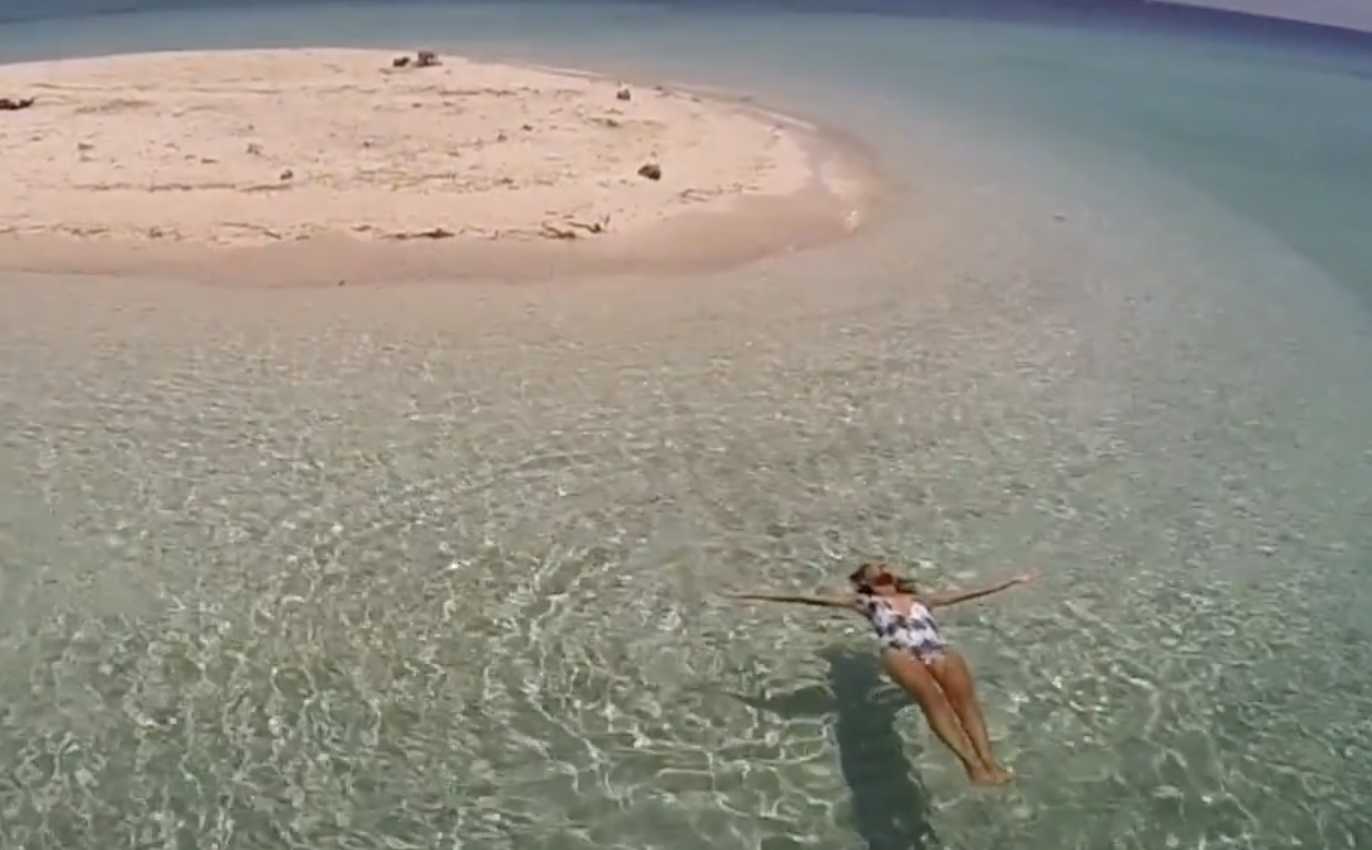 Sand: Not Just Something That Gets Between Your Toes

Below is a self indulgent article for which I offer no apologies.

A couple of years ago when the lease on our villa expired, I asked Phylipa something along the lines of “What next?”

Rather than renew our lease for another year we decided to go beachcombing in the Philippines with no fixed agenda for the next two months.

We packed our belongings into a self storage unit, padlocked the door, paid for 6 months storage and booked flights to the Philippines

We’d been told about relatively untouched places on Palawan Island where diving with whale sharks, turtles, manta rays and vast sardine shoals that migrate were available.

Brainwave! To call it a business trip, I had to wrap the journey around some form of research.

‘Geometric Patterns in the Sand’ sounded good.  Well, that’s what I told my accountant when I funded the trip with our business card.

“I’m considering becoming a professional ‘Sandologist” was my break-the-ice offering.

I didn’t think accountants were that smart.

“Heaven forbid!” said I with as much confidence as I could muster. He looked bemused but the slight smirk implied his tacit agreement.

I never did learn much about geometric patterns in the sand but I found a lot of limestone formations, pristine secret beaches, hidden lagoons, islands, WW2 shipwrecks to investigate, perfect blue skies, turquoise waters and fish of vibrant colours.

In my opinion the Palawan beaches are top of the league tables when it comes to natural attractions.

Sands can be golden, white, black, tan, pink and even green, each containing their own minerals and biological mixture from the surrounding ecology.

Sand itself is formed by the grinding of shells, rocks and coral. The dark sand comes from volcanic rock; the clear grains are quartz.

Beaches may look similar in travel brochures but only when examined under a microscope can we see how beautiful each grain is – from honeycombed structures to multi-coloured fragments of corals and rocks.

The fact that grains are so tiny evidences the high-energy power of the wave action.

Within the sand will also be a smattering of single-celled protozoans and the calcium carbonate skeletons of reef creatures.

When people get to a beach, they park their car, load up on towels and other beach gear and head for the visually appealing sands of the beach.  It’s their chance to relax and switch off from their daily grind.

Here’s the self-indulgent bit…..I’ve come up with my favourite beaches.

Given that everything is subjective, these are not to be mistaken for a league table of the best beaches in the world.  They’re not.

My list is made up from beaches of a certain quality that I had a really memorable time on.

There’s the difference.  The memories that linger!

Before I launch into names and locations, I’ll say that I’ve made more than a mistake or two reading someone else’s opinion and going to that beach thinking I was in for a good time.

The most recent debacle was Atuh Beach, Nusa Penida, Indonesia

For some reason this beach gets rave reviews.  So much so that when we spent a few days on Nusa Penida, we had to investigate.

We rented a scooter and drove to the south coast – thankfully a few weeks after they’d paved the terrible rocky road that had been an off-putting feature for years.

After negotiating the exhilarating descent to the beach we chose a spot with large colourful umbrellas and took in the impressive view of the surrounding cliffs before venturing into the breaking waves.

We weren’t walking over soft sand; instead our path to the water’s edge was over broken shells and coral.

After a couple of steps into the water I headed straight back to our deckchairs to put on my black rubber shoes.

Hidden below the water line were rocks which, when the tide went out, became visible.

Not a beach worth any realistic rating.

As a result of fishermen using dynamite the beaches on the three popular Gili Islands off Lombok were much the same. The beaches are difficult to walk over barefoot and there are rocks in the shallows.

OK rant over.  Let’s get on with the beaches that created special memories in my life.

It would be reasonable to suggest that every beach on the west coast of Palawan Island would stand a chance of reaching my top ten but I had to choose one and this was it.

“Impossible to get to” we were told.  “The rains have washed out the track and it’s too steep in parts.  You’d need a trail bike to get there.”

Always up for a challenge we rented a 125cc scooter and headed north from El Nido to discover this beach for ourselves.

Turns out it hadn’t rained there for a few days. The scooter made it without much wheel spinning and we parked up by a wooden shack.

The waters were crystal clear, the sand seemed to stretch out for ever and the eight other people on the beach very friendly.

A leisurely swim in the waters, a game of beach volleyball with the few other beachgoers that day, Nasi Goreng and a couple of cold beers.  The memory of that idyllic afternoon won’t go away for a long, long time.

Probably the most perfect sand I’ve come across for building sand castles. As a father of two young lads it was my job to build structures of sand with them to knock down as the tide came in.

As the local fishermen returned in the afternoon with their catch, we were encouraged to join them to see strange sea creatures we couldn’t identify.borocay

This is by far the best beach I’ve been on in terms of white sand, clear waters and all the other attributes you’d expect.  We arrived after the beach island just after it reopened in 2018 and spent 10 days there. It rained for 8 of them!

Sure we had fun meeting other people, drank lots of coffee, mooched around the very touristy shops and enjoyed the benefits of happy hour and live music in several different welcoming bars and restaurants.

Our hotel bedroom quietly mud-flooded while we slept; I discovered this when I got out of bed and stood in it.  Thankfully our cases were off the floor.

The only downside was the number of Japanese, Chinese and Korean tourists taking selfies.  It reached epidemic proportions.

But that beach was something else….

I took a much-needed break from life in Hong Kong for ten days just before the Christmas tourist hordes arrived.  Dropping off my bag in a beachside one-room-with-aircon cottage I spent from dawn to dusk on the beach and in the calm, clear waters.

Fresh seafood, cold beers and I found the time to read one of James Michener’s lengthy, fictional family sagas from beginning to end.

At 10 years old I was sailing back to England on with my parents and siblings.  The Glen Line cargo ship we were on stopped in Galle Harbour for a few days to unload/load cargo.

My parents took myself and my two sisters ashore and we drove 30 minutes up the west coast to Hikkaduwa.  I remember the beach like it was yesterday – beautiful sands, leaning coconut palms with and crystal clear waters.

I went in for a swim. I hadn’t been in long when a large, approaching dark shape gave me more than a little cause for concern.  It was between me and the beach so I broke all speed records to reach a small boat and climb on board for safety.

The boat had a glass bottom through which I could watch as two large turtles swam underneath.

We had a family holiday in Sri Lanka in 2009 spending a week at the Funky de Bar beach shack. Great place opposite good surf spots. It’s still an amazing place.

The coastline along the Algarve by Lagos is exquisite.  To the west are sandstone formations and to the east a long beach broken only by a river outlet that can become hard to cross in the outflowing tide.  I found that out the hard way when my sister and I were swept out to sea in a rubber boat with a 1/2 horsepower engine.  Thankfully my fisherman friends on the outgoing sardine boats spotted me and came to our rescue.

For my Geography A Level I wrote about the area and its properties. Being the Atlantic rather than the Mediterranean, the water was cold to swim in.  On one occasion I swam into a school of sardines and stayed there, enjoying their company until I remembered that sharks eat sardines as well!

Change is the one constant in life. What I love is seeing the change from week to week as the tides rearrange the composure of beaches, the incoming waves hammer the shoreline forcing water through the sand and expelling air between the grains.

And then there’s the stormy season – pushing large trees about like matchsticks, sometimes washing beaches away entirely.

I’ve not been to Sardinia but it seems their sand is being stolen at such a rate that fines of up to Euro3000 are being levied for ‘sand thieves’   What good is sand in a bottle?

If you want a few minutes of escapism, here’s a video “Following A Broken Compass” made by Kristian Gerathy in the waters off Flores. Even if you watch the first couple of minutes you’ll want to dive into the clear waters and spend time on the stunning sand island.

Here are some outrageous, ridiculous and plain stupid complaints made by British tourists to their travel agents. They clearly need to appreciate beaches better.

“We found the sand was not like the sand in the brochure. Your brochure shows the sand as yellow but it was white.”

“The beach was too sandy.”

“No-one told us there would be fish in the sea. The children were startled.”

And these people reproduce!

PS And that’s just the sand. There are so many beautiful rocks as well (these ones are from Madagascar)…..