Boost Vital Mineral Levels (…And Your Cooking Will Taste MUCH Better) 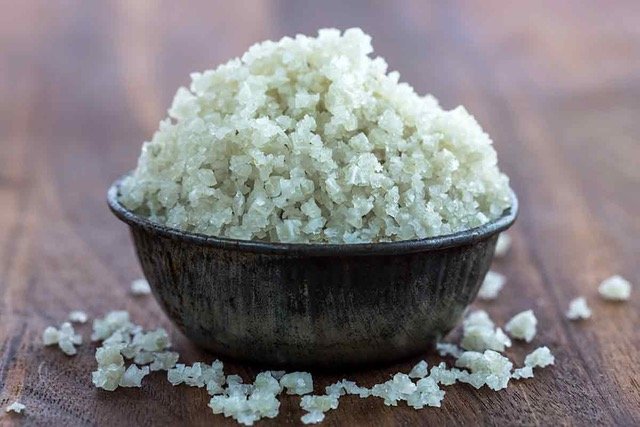 Even a tiny amount of Fleur de Sel on your tongue will explode with the tang of the mineral ingredients and improve any meal.

When you learn that 99% of people in the western world are mineral deficient, you’ll never want to use refined salt again.

The delicate and fine moist granules of creamy-white unrefined Fleur de Sel are traditionally harvested by women. They skim the surface of the sea water in the salt marshes. Although hugely beneficial for men as well, it has been described as ‘the ideal woman’s salt’.

Unrefined sea salt is not only good for you? It’s VITAL for you!

In the year 2000 when Phylipa and I were holidaying California, we went down to the local Sunday organic market and spotted a lady selling salt. Curious as to why, especially when salt carries such bad press, we asked her what the story was.

By the time she had enlightened us with the truth about unrefined sea salt, we had a whole new outlook on it.

We tasted the Celtic Sea Salt right away understood what she meant . So impressed were we that when we returned to England we drove over to Brittany to buy a van load of salt from the marshes near Guerande.

We’ve been back to Brittany many times since then. We get so much more into the spirit of it by driving over, enjoying French Cuisine in nearby Le Pouliguen and crêpes in Le Croisic.

Guerande is a walled town originating in Medieval times; just watching the paludiers harvest the salt with wooden implements adds so much more to the enjoyment.

The salt bays in the Guerande marshes near St. Nazaire are the last haven of an ancient traditional craft dating back over 1,000 years. Back then Brittany supplied half of France with salt, a figure that’s since dwindled to half a percent. Almost all of that is the delicious unrefined grey sea salt, so prized by the leading French chefs and bakers.

The geographical orientation of the coastline also plays such an important part in the quality of naturally extracted Celtic Sea Salt. The ocean water is channelled into pristine ponds, edged with natural waterways, wild grasses and other green plants.

The wind and the sun evaporate the ocean water, leaving a mineral-rich brine. The live flowing mixture is briskly stimulated by the salt farmer’s actions, and within hours the dazzling crystals form and are gathered by hand.

The method used for gathering salt from natural flats is crucial to the production. The salt fields of Brittany are lined with a natural layer of clay and sand. This method is followed by a dedicated group of professional salt farmers in Brittany who carry on the traditional skills that have been passed down for generations.

Woah! Isn’t Salt Bad For You?

This statement makes little sense. Our cells all contain salt. We sweat salt. Our tears contain salt. Our blood is salty. Our electrolyte system needs salt as do our kidneys.

You even spend 9 months in a saline solution before you are born!

If we don’t eat salt, where will it come from? The question should not be “Do we need salt?”. The questions should be “What kind of salts are good and bad for us?”.

There are basically three kinds of salt:

Scientific research reveals that there are actually very few salt-related health problems. A healthy active lifestyle demands a reasonable salt intake. The contention that our bodies can function on no salt at all or on a restricted ration of salt causes more problems than it’s intended to solve.

Life is closely dependent upon the presence of sodium. To clearly understand the role of sodium in blood, we have to examine it in combination with water and the various ions; chlorine, potassium, calcium, hydrogen etc. It is more important to study the co-activity of sodium with these other ions than rather than the sodium element alone.

Gros Sel Guerande (Light Grey Sea Salt ) is harvested in late summer. These are the largest of the Celtic Sea Salt crystals and are best in soups or sauces. This is ideal for cooking.

The devastating effects of refined salt

Today every common table salt is artificial and sadly pales beside the real sea salt. Out of the richest spectrum of 92 essential minerals found in the ocean, the industrial refined variety retains only two!

In the process of refinement salt is harvested mechanically from dirt or concrete basins with bulldozers and piped through metal conduits. It is then subjected to a degrading artificial processing, heated to 2000 degrees Fahrenheit to ‘crack’ the molecular structure, robbed of all its minerals and trace elements before being further adulterated by chemical additives to make it free-flowing, bleached and iodised.

Remember it’s unrefined salt you want. Refined or processed salt is often labeled as “Natural Sea Salt” in supermarkets and health food shops, so be careful what you buy.

When you read “With Added Magnesium” on the label, you know it’s just processed salt with added magnesium. Avoid it.

According to Jacques de Langre, high blood-pressure problems lie not in excessive salt intake but in an overactive hormone system. When overactive, renin levels are excessively high indicating a psychological need for salt.

Salt starvation can occur if the patient is put on a low salt diet. On the other hand low renin levels which occur in a third of hypertensive people actually reveal a sodium excess. Only patients in the latter group should lower their sodium intake.

Factors that influence blood pressure are heart rate, changes in blood volume and the contraction and dilation of blood vessels. A change in any one of these factors providing the other two remain constant, will have a direct effect on blood pressure. Blood pressure is regulated via the dilation and constriction of blood vessels, the control of blood volume and heart rate. A healthy cardiovascular system may be maintained through regular aerobic exercise like walking, jogging, rebounding, cycling, tennis, ski-ing (water or snow) or swimming.

The History of Salt

Salt didn’t make history but contributed greatly to it. As frugal as they were, our ancestors always had salt with their meals. Salt was so precious and vital that in early Rome, soldiers were paid with daily handfuls of salt, later changed to a sum of money; the salarium.

In the Middle Ages, the salarium became the sol, – the sou – which funded the wages of the military. The salary became the privilege of the civil servants who became known as the salaried. Throughout the ages, salt continued to be the source of intense commerce and was associated with the preservative of food.

This important role of preservative made salt a good choice for taxation in countries all over the world. There were 25,000 salt tax collectors in eighteenth century France! Their demands were such that Vauban, a highly placed government official had regrets:

But the salt tax was not abolished completely until 1945. Except for being subject to an ordinary federal tax, all that is left of this ancient regime is that it is still illegal to take more than one litre of salt water from the sea without authorisation from the Minister of France!