As the quality of drinking water around the world continues to deteriorate, we must all explore sustainable alternatives to keep our families safe from harmful pollutants.

Unfortunately that includes you and me.

The threat is not coming from a new virus or the destruction of the oceans (although that’s happening anyway!)….the threat is of a drought.

It’s not just a drought they’re warning us about, it’s a drought of biblical proportions.

They describe an event so catastrophic and so horrifying that has the potential to wipe out up to 90% of the U.S. population and heaven knows what percentages on other parts of the world. 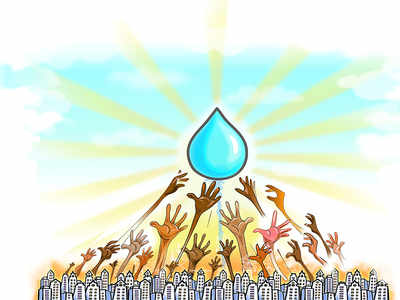 Pay attention to what I write, because this has value for everyone in the possession of a heartbeat.

Let’s give this a perspective we can all identify with.

It’s not breaking news if I tell you that the water coming out of your taps is already toxic. This toxicity is more widespread in cities than rural areas, the most dangerous offenders being lead, chlorine, perchlorate, copper, manganese, arsenic, nitrates, mercury, fluoride, PFOA (Perfluorooctanoic acid) and radioactive substances. All of these may enter your body as you drink, bathe or shower.

On average, about two gallons of water flow from a tap each minute. Something as simple as turning off the tap while brushing your teeth can save between three to four gallons of water per person per day.

I leave you to calculate how much water can be saved here depending on the number of people in your home and how often they brush their teeth!

Last year I wrote an article about the need to become more aware of, and even self-sufficient in some of life’s essentials.

Based on the political, medical and economic shenanigans we’ve borne witness to over the past few months (and there are plenty more to come!), the need for that extra degree of independence is becoming more real than ever.

If you’re wondering why you have to be alert to everything you’re told, read or see on the bought-and-paid-for-media, let me refresh you with just a little of what’s going on wherever you live:

• Google any 3 digit number followed by ‘new cases’ to see the extent of COVID-19 media manipulation! (You don’t even need to mention COVID-19)

• Reckless money printing in the economies of the West will undoubtedly lead to hyper-inflation.  Remember the horror stories in Zimbabwe where the Government issued banknotes for $100 Trillion Zimbabwe Dollars?

• Businesses in North America, Great Britain and Europe are declaring bankruptcy faster than at any time since 2013 under a towering overhang of debt.

• Wondering what the future holds for you?….look at the current state of Venezuela…and don’t think a version of that isn’t going to happen where you live at some point.

• Riots across North America to arbitrarily bleach its history are a perfect distraction from what’s really going on.

OK that quote covers food – water is something humans need to have in some quantity at least every three days.

Many Governments have broken all 11 of the 10 Commandments at the expense of hard working populations. To suggest that our world is rapidly imploding would be an understatement.

As a result, I cannot over-emphasise the likelihood of serious water emergencies taking place in 2020 and beyond

Its seriously time to prepare yourself and your family.

I retraced my hypothetical footsteps and found the article I made in a past newsletter….for generating your own water.

If that sounds somewhat far fetched, just imagine yourself turning on the shower one morning to find no water comes out.

Believing it to be a temporary issue you head to the kitchen to find that nothing comes out of the taps there either.

You check the power switches and they seem to be ok.

Your neighbour knocks on your door to ask if you’re having the same problem as them.

So it’s not just your house that’s affected.

What can you do to source drinking water?

On the first day of no taps working you probably drove to the supermarket to buy bottles of water to remedy the problem, but when you went back there a day or so later, the water shelves were bare.

Too fantastical? If people were easily duped into to panic-buying toilet paper in March this year, what do you imagine conditions will be like when people need water?

What I wrote about last year was an innovative system, originally developed by the military as a ‘portable water generator,’ extracting water from the air.

When I first read about this innovation although a couple of years ago I thought “How useful” but there was no compelling reason for me to look further.

Since its release this system has become a roaring success in private homes as well as the military of seven or more countries.  They use it to produce drinking water in conflict zones, in the hottest areas and in the driest of environments.

How Does The Water Freedom System Work?

Working on a simple condensation principle n the device draws in humid air and cooling it down before transforming it into drinkable water.

The concept is simple and effective and there’s a step-by-step guide showing you exactly how to assemble it.

The links to where you can buy the parts online are essentially for US buyers but you can walk into your local hardware store with a list and source most of the parts there.  The rest you’ll find at B & Q, Bunnings, Home Depot  or equivalent.

In addition you’ll learn more about water than you thought there was to know, including:

• how droughts can poison groundwater

• the adverse impact of chemtrails, Fukushima and EMP

• the limitations of using plastic bottles

• how to put together your Water Freedom System

My long-time friend Alex said to me “Having bought the components, that was almost easier to put together than a table from IKEA!”

If you ever struggle with anything you buy from IKEA, find a nephew, niece or the nearest teenager to put the Water Freedom System together before the taps in your home stop working, especially as this may only be a matter of time.

From Day 1 onwards you’ll have what will become the best life insurance available and suddenly you’ll become the most useful person to know in your neighbourhood.

All you need to do now is crank up the Mission:Impossible music and get started right away because that sound you hear in the distance could be the storm gathering.

Click on the link below to see what many applications this has. And if for any reason it isn’t for you, there’s a 60 day no-questions-asked guarantee.

….and from now on question everything you see/read/hear on the media.