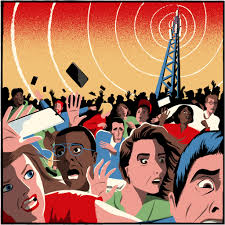 This fascinating subject is gaining more and more interest as people learn what is likely to cause serious and long term damage to their health from something being quietly installed across the road from their home or office.

To give you a little more perspective on the subject I’ll repeat the John Patterson story here:

Some months ago I found a new hero: John Patterson, a former Telstra (Australia) Senior Telecommunications Officer with 30+ years experience in communications technology.

John was a man with a passion for electronics and considered to be one of Australia’s leading experts on radiation.

Over the years John was responsible for testing Telstra’s digital systems.

But as his career progressed, John became very sick.

“The more I was exposed to it (EMR), the sicker I became,” he said.

The crunch came after two mobile phone base stations were installed—one on either side of the building where he worked.

By then John had been having regular heart attacks over a 4 year period.

In his diaries John noted the health effects he observed in himself and other workers, many of whom subsequently died.

Telecom had a very high number of suicides,’ John recalls.

When he reported his findings he was immediately fired.

John told his story to EMR Australia:  ‘In 1997 I took a legitimate measurement. I submitted an OH&S report that [the measurement] was a “dangerous occurrence”. This is the highest rated danger on the OH&S scale and meant that by law the installation should be shut down immediately.’

The result, however, was something quite different. John was sacked on the spot. Moreover, other staff members who found out about the measurement were also sacked without warning.

John then proceeded down the legislative channels that were available to him. He contacted in turn Standards Australia, the Australian Communications Authority, the Australian Radiation Protection and Nuclear Safety Agency, the Local government Association, Federal Parliament and finally the military.

In other words all the people that we pay through taxes to protect us from such debacles.

None of these agencies provided any support, though some authorities confirmed that John’s measurements and his conclusion were correct.

Finally a parliamentary committee concluded that John should deal with the problem in his local area.  So he did.

On 14 July 2007 John broke into a truck yard, ‘borrowed’ a former British army tank and systematically demolished six mobile phone base stations and two other sites in the West Sydney suburb of Mt Druit, before the tank stalled and he surrendered to police.

According to John, mobile phones and their base stations pose a devastating health risk to human life, to nature and to the planet that supports it.

Speaking to reporters about 5G he explained that 5G disrupts the biological system of your body – your brain, your nervous system and your muscles.

John was jailed, drugged and brutalised. He lost his home and his savings.

That was in 2007.  Thirteen years later the insidious impact of 5G on our lives has only become worse.

One other aspect worth noting here: John mentions the radiation being higher than the legal limit.

Open this clip TakeBackYourPower and scroll forward to the 44:30 mark.  Learn how governments classify safety limits for the benefit of corporate interests.

The millennial generation (those born between 1981 and 1996) are in a difficult condition.

A Blue Cross study showed that 54% of the millennial group observed had at least one chronic condition (depression, substance abuse, alcohol, tobacco, diabetes hyperactivity, hypertension, sleep disorders, Crohn’s disease) by the age of 27 and their health begins to decline further after that.

In other words over half that generation is not able to function or perform properly.  And their parents won’t leave them any inheritance as any savings are being spent on medical bills that are already higher than the medical bills of their parents.

And the major contributing cause?

Their almost constant use of cell phones, iPads, video games and smart watches that’s put them into a debilitating electro smog.

When the time comes to give your child a cell phone, as you give it to them, say “You are Superman (or Supergirl) and this is a box of kryptonite. It will drain your strength. Use it sparingly, keep it away from your body and switch it off at night.”

If you asked me 20 years ago what was the worst thing you could be doing was, I’d say using cordless phones around the house.

It was as bad as having a cell phone tower in your living room.

Today I’d say this has been overtaken by having a router on or near your desk, or closely because your immunity and wellbeing will unquestionably suffer.

It can’t be too different to living inside a microwave oven.

Associated symptoms are not always easy to determine.  One lady was told by her dentist she had receding gums. Only when he observed that the receding gums were on one side of her mouth only did she realise it was the same side to which she held her phone.

Here are a few things you can do to offset the damage from radiation: